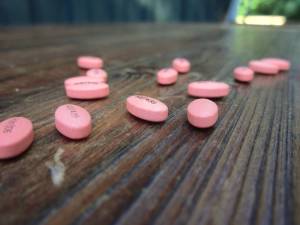 There has been a lot of comments made in my last post “Feeding the Beast” about how I mentioned I am not medicated. It was long road for me to get where I am at right at this moment. I have been on variety of medications in trying to balance me out. I have been on:
• Neurontin (gabapentin)
• Zoloft (sertraline)
• Depakote (divalproex sodium)
• Eskalith (lithium)
• Trazodone
• Ativan (lorazepam)
• Klonopin (clonazepam)
• Celexa (citalopram)

I have done the medication dance over and over. This with this on this dose. Maybe just this with a PRN (as needed) dose. And it all leads to the same dreaded question from the psychiatrist. “Do you think it is working?” I still get anxiety over that question because the answer always was, “I can’t tell.” The people around me could always tell. I remember when I moved into my apartment and I would talk to my mom on the phone. The conversation would go like this:

My mother has always been able to call me out. Most people didn’t know I was on them in the first place to even notice I was off of them. So every time I went to the psychiatrist I would try to fish around to see if my mom noticed a difference. Sometimes I was just get annoyed at my psychiatrist’s inability to believe I couldn’t tell and just lie. “Yeah sure, this dose is working great.” I would get the nod of approval and see he/she in three months.

I am sure many of you may not understand how I couldn’t tell the difference. Many people’s bipolar disorder is late onset. Therefore they have spent most of their lives normally and then something triggers the rollercoaster of moods. For me, however, this is how I have lived my entire life. They believe I had it as young as 7. Possibly younger than that but that is when I was able to remember incidences that alluded to bipolar disorder. I am now 28 so that means for 21 years I have had Bipolar Disorder. I wasn’t diagnosed until I was 16/17. (I was hospitalized before my birthday and started therapy right after leaving the hospital. I turned 17 in the meantime.) So that means for 11 years before diagnosis, I was dealing with it unknowingly on my own. I had always known that there was something different about me. I have always noticed that I think differently than other people. I have always felt out-of-place in group situations. It is not that I am anti-social. I love being in group settings but I have always had a hard time feeling like I belong.

I remember once that I had actually gone to my mom about this. In the great age of dial-up, I came across a mental health quiz. It had indicated that I could have Bipolar Disorder. I took my findings to my mom. She just looked at me and told me that I wasn’t Bipolar and it was all in my head. HA! Oh the irony. In her defense, I was always known to be moody and dramatic. I also have had this strong need to fit in. I was growing up in the generation of the apathetic teen. You know before the next generation decided to ruin it by making it into emo. I had this group a friends who decided to be depressed and apathetic was cool. However while they were looking for reason to be depressed, I really was depressed. Another reason she dismissed me is because my father was an undiagnosed bipolar. She had seen what life was like with one and I don’t think she wanted that for me.

So I continued on knowing something wasn’t right with me until I had my breakdown. When I was diagnosed, it was both a shock and a relief. I was relieved to know that this wasn’t all in my head and that there really was something not right. At the time, I didn’t know really anything about the disorder. I thought it was like depression. Something someone can have, get medicated, do some therapy and eventually get over. I had no idea it was a life sentence. It was crushing actually to know I was going to be like this the rest of my life. So we started treatment.

This is when the real anxiety began. Treatment is not just seeing a shrink, talking about your problems and popping some pills. It is a complete lifestyle overhaul.  You need to sit down and evaluate your life. You have to look to see what your triggers are and how to either avoid them or deal with them. For instance, I am prone to insomnia during mania. A way to avoiding a cycle of insomnia is going to bed at the same time every day and getting up the same time. Easy to do except when you are a teen and staying up until 1am with your friends is the thing to do. It forces to rediscover who you are.

In some cases, it means remembering who you were before your illness was triggered. In my case, it was separating myself from the bipolar. It sounds pretty easy on paper. Except, I hadn’t damn clue of where I started and where the bipolar ended. On top of that, what teenagers knows who they are? I sure as hell didn’t. I was completely lost. I started to question everything about myself.  I was having an identity crisis. On top of that people started only seeing me as my disorder. Nothing is more crushing when your feelings are only seen as mood swings. I had lost all validation and sense of self. I started to believe that I was my disorder. I believed that there was no difference between my personality and my disorder.

I became angry and bitter over the next few years. I kept everything to myself. I mean why bother if I am going to be dismissed anyway? It had actually became so bad that I was in a physically abusive relationship that I kept to myself. I figured no one would believe me anyway. I stopped telling people that I had bipolar disorder. It was my shameful little secret.  Then one day I hit complete bottom. I started cutting myself again. I would wait until he was completely asleep and then I would go to the bathroom. I would lock the door and then break my razor and pull out the blade. I would just sit and the bathroom and cry as I cut myself.  I had given up.

What was it like when you were first diagnosed? How old were you? How did you handle it? Did you tell anyone?