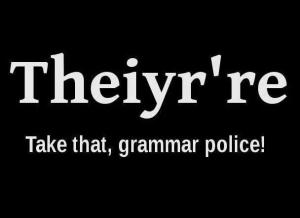 Sometimes the words in my mind go to fast for my hands. Sometimes my brain is in such a dense fog some of my words cannot push through. I often have issues with things I may post not making sense. Words may be missing. Punctuation may have fallen off the earth. It is not that I don’t know to put them there. My brain just misfires and they do not end up on the page.

I will be honest; I heavily rely on grammar programs to catch these things. Mania causes my brain to scream at a million miles an hour. I try to get everything I am thinking on the page properly. It just doesn’t happen that way. I will miss whole words or phrases. I will skip a period or comma. Even when I reread the same sentence over and over it again, it appears correct. It is not until I look at it during another time do I realize I sound like am in elementary school. It may seem as though I am unintelligent. I know how to write well; it just does not come out that way.

I guess the best explain it is my words are like people. The paper is a doorway. When I am manic or anxious, it is like 1,000 people trying to get out of one door. They may have started out in order, but something causes a panic. Then the words, all try to get out at the same time. Words come out of order or unable to come out at all. My brain is unaware of the chaos. It thinks it’s coming out in an orderly manner. It is not until later when it has had time away, can it see the chaos left behind.

Depression affects the writing differently. It is more like the words are trying to get out, but forget that they are doing halfway. During a more depressive phase, I have been known to lose who phrases in a sentence. Sometime it is a word or two. Somewhere in the journey, “me” or “the” forgot it was their turn to go out the door. Matter of fact, they forget they even belonged in the sentence.

I also gave dyslexia. It not something that I speak much about. It doesn’t affect me as much as it used to. However, when the brain is flustered, it will creep up. I have been known to switch the order of words while writing or speaking. For instance, instead of saying “The raining is coming in the window.”, It will come out,” The window is coming the rain.”. Honestly, my brain has no idea is it is wrong. As I know it, I said or wrote the words in the proper order.

Why I am writing this? Well it is because it happened to me earlier today. I had left out the word “me” out of a post on Instagram. Even though I had caught it about an hour later, I still felt embarrassed. This a day and age of where people will judge you for the smallest mistakes. I know many self-proclaimed “grammar Nazis”. I often wonder what they may think of my writing. I mean I understand grammar, sentence structure and syntax. On the flip side, my brain doesn’t give a fuck.

I do grammar checks, but they can only catch so much. Also, I enjoy writing as if I was speaking. Speech to writing doesn’t always translate the same. I think writing syntax and spoken syntax can sometimes clash. I just want people to be aware that not all of my grammatical and structural mistakes are intentional. I don’t have control of what happens in the space between my brain and the page. So I apologize for my grammatical errors that I may make from this point on.